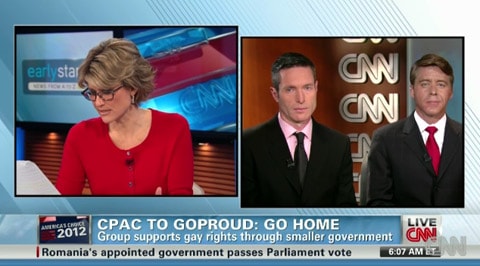 On CNN's Early Start with Ashleigh Banfield and Zoraida Sambolin, GOProud co-founders Jimmy LaSalvia and Chris Barron came on to discuss their rejection from CPAC and why they're devoted to a party and movement that rejects them because they're gay.

The rest of the conversation, which gets cut off, went like this:

BANFIELD:  Here's the thing that gets confusing to some people who might be watching right now.  And that is, I mean, I don't want to be so foolish to say, gee, how can a gay group be conservative since there seems to be competing messages?

But I will tell you this, I got a release from you guys back in January 27 saying after last night's Republican debate one thing is clear, any one of the four remaining GOP presidential candidates would be a dramatic improvement over the failed presidency of Barack Obama.

BARRON:  Well, let's be clear.  First off, we strongly disagree with what Rick Santorum said there.  Those comments are absolutely outrageous.  Secondly, Rick Santorum is not going to be the nominee of this party. I know that the mainstream media and some in the party want to continue the charade that there is a horse race going on here.  Rick Santorum is not even on the ballot.

BARRON:  John McCain lost 19 states, 17 of those after he won in South Carolina and Florida and his nomination was never in question. The bottom line is the only candidate who has a national organization that can win this primary is Mitt Romney.  I mean, we can continue to pretend that there's a horse race and I know that the media wants to pretend like there's a horse race.

BANFIELD:  Let me give you that.  Let me give you that one, guys.  That's Rick Santorum.  Now the other candidates as well that you're supporting also support the idea that gays shouldn't serve in the military. And they also support the idea that there should be a constitutional amendment to prevent gay marriage in this country.  That doesn't seem like it's in sync with what you would want in your candidate?

LASALVIA:  That's not exactly true.  Ron Paul doesn't support the constitutional amendment and even Mitt Romney went so far so say it's not likely.  That particular proposal has lost support ever since it first failed in Congress in 2004. The reality is, we're all living in this Obama economy.  Gay people are living in the Obama economy, too.  And we've got to come together.  Gay and straight, liberal and conservative, and fire the president. That's what we have to do as is a country.  We have to look at who is best positioned and best able to do that.  And to fix the problems that everyone, including gay people care about, those kitchen table issues that everyone is worried about right now.

BANFIELD:  I appreciate it.  Jimmy LaSalvia and Chris Barron, I could go on for a whole lot longer and I do appreciate you guys coming to talk to us today.