Book of Mormon's Andrew Rannells is starring in the new sitcom pilot The New Normal by Glee creator Ryan Murphy, and Michael Ausiello reports that Murphy has now found Rannels a husband: 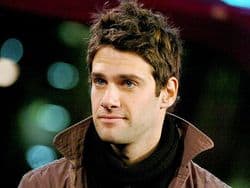 The Glee boss has tapped Hangover actor Justin Bartha to play Rannells’ better half in The New Normal, his single-camera sitcom pilot about a blended family made up of a gay couple and the surrogate helping them have a baby of their own.

Georgia King has been cast as their surrogate, Goldie, and, as previously reported, Ellen Barkin co-stars as her glamorous grandma.

In other news, Brandon Routh and Michael Urie will play a gay couple in the new sitcom pilot from the creator of Will & Grace, Deadline reports: