A major ruling from U.S. District Court Judge Jeffrey White, a Bush appointee, who has ruled the Defense of Marriage Act (DOMA) unconstitutional for violating the Constitution's guarantee of equality. 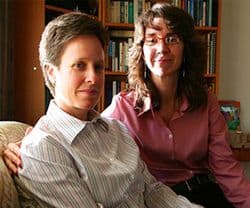 U.S. District Court Judge Jeffrey White, who sits in San Francisco and was appointed to the bench by President George W. Bush, issued the ruling Wednesday afternoon in a case involving federal judicial law clerk Karen Golinski's request for benefits for her female spouse. White said the stated goals of DOMA, passed in 1996 and signed by President Bill Clinton, could not pass muster under a so-called "heightened scrutiny" test or even a lower "rational basis" threshhold.

"The imposition of subjective moral beliefs of a majority upon a minority cannot provide a justification for the legislation. The obligation of the Court is 'to define the liberty of all, not to mandate our own moral code,'" White wrote. "Tradition alone, however, cannot form an adequate justification for a law….The 'ancient lineage” of a classification does not render it legitimate….Instead, the government must have an interest separate and apart from the fact of tradition itself."

Check out the ruling here.

White, who was appointed by President George W. Bush, a Republican, issued a permanent injunction preventing the government from further interfering with Golinski's ability to enroll her wife in the insurance program.

Chris Geidner at MetroWeekly pulls out some key pieces:

The Court has found that DOMA unconstitutionally discriminates against same-sex married couples. Even though animus is clearly present in its legislative history, the Court, having examined that history, the arguments made in its support, and the effects of the law, is persuaded that something short of animus may have motivated DOMA’s passage:

Prejudice, we are beginning to understand, rises not from malice or hostile animus alone. It may result as well from insensitivity caused by simple want of careful, rational reflection or from some instinctive mechanism to guard against people who appear to be different in some respects from ourselves.

Adds Borelli, in a press release:

"The Court recognized the clear fact that a law that denies one class of individuals the rights and benefits available to all others because of their sexual orientation violates the constitutional guarantee of equality embodied in the Fifth Amendment. The Court agreed with us that sexual orientation discrimination by the government should receive heightened scrutiny under the constitution.  It then concluded that DOMA could not meet that standard, and that there was not even a rational justification to deny Karen Golinski the same spousal health care benefits that her heterosexual co-workers receive."

And here's some extra background on the case from Lambda Legal:

Judge White's ruling is the latest victory in a battle that began in 2008, when Golinski, a 20-year employee of the U.S. Ninth Circuit Court of Appeals, sought to enroll her wife, Amy Cunninghis, in the employee health plan.  It is the first DOMA-related ruling since U.S. Attorney General Eric Holder announced that the Department of Justice had determined DOMA was unconstitutional and would no longer defend it, and the majority leadership of the U.S. House of Representatives hired outside counsel to defend the discriminatory statute.  A similar ruling holding DOMA unconstitutional in a separate case is on appeal in the 1st Circuit.

Golinski's struggle to enroll her spouse in the family health plan, a benefit routinely granted to her married heterosexual co-workers, travelled a torturous path, including two separate orders by Ninth Circuit Chief Judge Alex Kozinski directing that Golinski be allowed to enroll Cunninghis in the health plan, orders ignored by the U.S. Office of Personnel Management (OPM), citing DOMA.  In April 2011, Lambda Legal and Morrison & Foerster filed an amended complaint directly challenging the constitutionality of DOMA.  Judge White heard arguments on this amended complaint on December 16.

Said Golinski: "I am profoundly grateful for the thought and consideration that Judge White gave to my case. His decision acknowledges that DOMA violates the Constitution and that my marriage to Amy is equal to those marriages of my heterosexual colleagues.  This decision is a huge step toward equality."