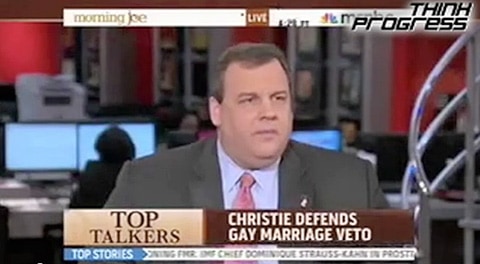 On this morning's Morning Joe, New Jersey Governor Chris Christie talked about his veto of marriage equality and compared his position to that of President Obama's, Think Progress LGBT reports. 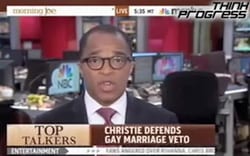 After the Washington Post's Jonathan Capehart points out that Christie wants to put civil rights up for a public vote and Obama doesn't, Christie lashes out at Obama, calling him a coward:

The President is silent on this like he’s silent on every issue that’s difficult for him. […] Let’s have the President of the United States show some courage, come on this program, look into the camera like I’m looking into the camera, and state his position. He won’t because he wants to have it both ways. I’m not looking to have it both ways, I vetoed the bill. That’s my position. What I’ve offered to the supporters of same-sex marriage is if one of your reasons for why I should have voted signed it was because you’re telling me the majority of the people of New Jersey want it, then prove it. Put it on the ballot and prove it. At least I’m standing up for what I believe in. The President has hidden on this issue, Jonathan, he’s hidden on it….This is the type of cowardice that we don’t want.