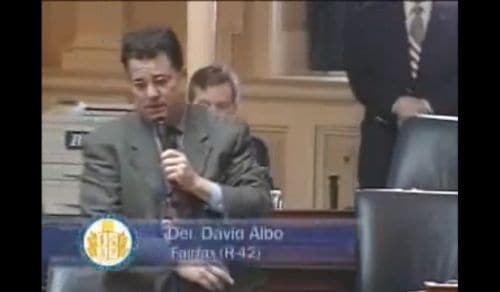 Not two weeks ago, male Republicans in the Virginia legislature were advocating mandatory "trans-vaginal" ultrasounds for women seeking abortion in the early weeks of pregnancy. If they'd had their way, women seeking abortions would have had camera-equipped metal thingamajigs forcibly inserted into their vaginas to snap pictures of fetuses too underdeveloped to be detected with a standard ultrasound.

That battle's over now — "trans-vaginal" ultrasounds shall remain purely elective in Virginia — but one Virginia lawmaker won't let it go. He's milking the issue for its comedic value. That's State Del. David Albo, who assumed the dais in the House of Delegates on Friday to relate an allegedly humorous anecdote about how media coverage of the legislation disrupted his attempted seduction of his wife. As he told the story, he set the mood with some porn-y funk music, played through his cell phone.

Previous Post: « Movies: It’s Oscar Weekend. Predictions. How Are You Celebrating?
Next Post: Fred Karger’s Campaign Site Was Shut Down Because It Criticized LDS Church »