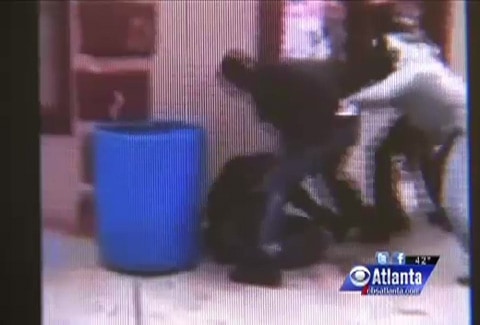 On Monday I posted a hideous video of an Atlanta gang ambushing and attacking a gay teen outside a grocery store while laughing and calling him a “faggot”.

Today, Brandon White, the teen attacked in the video, will speak out at a press conference, CBS Atlanta reports:

Before White speaks, an emergency safety meeting will be held at 10 a.m. for the Pittsburgh community at Iconium Baptist Church.  Greg Smith, the executive director of the HIV Intervention Project, or H.I.P., encouraged White to talk.

“He is doing what a lot of us would never do. He is standing up with courage,” said Smith.

Smith was very passionate when he spoke to members of the Atlanta Black LGBT Coalition about White.

Watch footage of Smith speaking to the Atlanta LGBT Coalition and the CBS Atlanta news report, AFTER THE JUMP…

Video may take a few seconds to load: