Gay Republican presidential candidate Fred Karger, who is still campaigning and stirring things up where he can along the way, is planning to file a complaint with the D.C. Human Rights Commission against the Conservative Political Action Conference, alleging that he was denied a booth at the conference because he is gay, Buzzfeed reports. 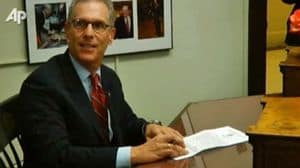 Writes Karger in the complaint:

Al Cardenas and his American Conservative Union have violated mycivil rights and certainly appear to be in direct violation of the Districtof Columbia’s 1977 Human Rights Act.

In the complaint, Karger also details the campaign by conservative hate groups like AFTAH, as well as the Liberty Counsel, to exclude gay groups from the conference, a campaign which ultimately led to gay conservative group GOProud getting the boot.

Read Karger's complaint, AFTER THE JUMP…