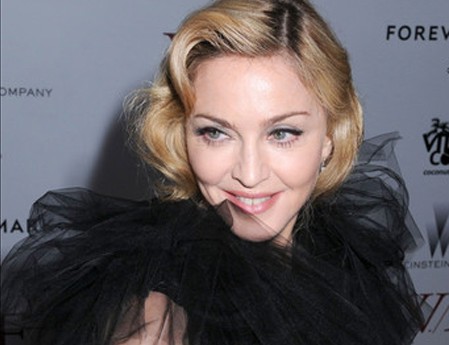 The one and only at one of many film premieres for W.E.

MADONNA ROUNDTABLE INTERVIEW
The room freezes in place. She's the first person to speak after her entrance

"Hi," she says casually, like it's Nothing. But she must know it's not. This is most definitely Something.

"Hi everyone. It's Madonna," her publicist adds redundantly as they near the table of journalists. As if She could possibly be anyone else. Madonna shakes all of our hands (omnipresent black gloves: Check!). She repeats all of our names back to us. Madonna saying your name back to you is a strangely surreal experience, both utterly mundane and impossible.

She has entered 'The (Mostly) Gay Room' as its been dubbed to discuss her new film W.E., since most of the journalists are with gay publications. "Cool." is her monosyllabic response. She's promised we'll put her in a good mood for the rest of the day. "Let's start with levity," she says though it sounds more hopeful than bossy.  We're all squished round a table with recorders on. Normally roundtable press functions are ruthless and noisy. The stars are barely allowed to take a breath, without someone shouting another question for fear of missing a window. This room, The (Mostly) Gay Room, is reverent. Madonna takes her time. Rarely does anyone step over her words. She answers each question methodically and slowly.

Unless she doesn't want to.

"Please don't throw those tired clichés at me," she says when one guy dares to begin his question with 'Queen of Reinvention'. Though, once the room laughs, she does answer his question.

MADONNA ON CHILD REARING AND "W.E." AFTER THE JUMP… 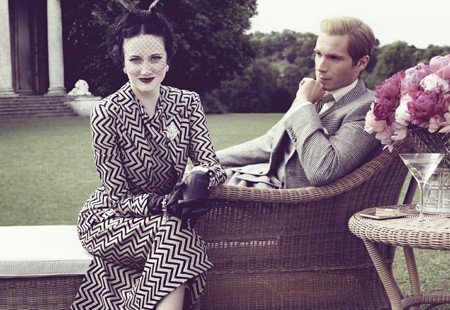 Andrea Riseborough and James D'Arcy as the Duke and Duchess of Windsor in W.E.

"Not that this has anything to do with my film," she begins, humoring the only truly off topic question which she deems interesting. How does she approach parenting when her kids are obviously growing up in entirely different circumstances than she did? "My parents raised me in a very conventional way and I rebelled against it. Now my children come to me and they often want to do things because everybody else does them and I say to them 'That's just the worst reason i've ever heard for doing something' and I encourage them to question things,to take responsibility for their behavior, to think outside the box. They will have a different set of challenges. They will be compared to me. I will be some kind of benchmark that they have to live with and deal with… We are all born into our challenges. I don't think for a second that life is going to be simple and easy for them."

She's wearing a bracelet that's much like the one Wallis Simpson (Andrea Riseborough) wears in the film. "Cartier made two bracelets — for the film not me. They recreated them for Andrea to wear. I asked if I could have one at the end and they said 'No.'" she says, with a self-deprecating laugh. (Yes, there are people that tell Madonna 'No.') "They made this for me as a consolation prize. I got four crosses, one for each of my children. Better than nothing." 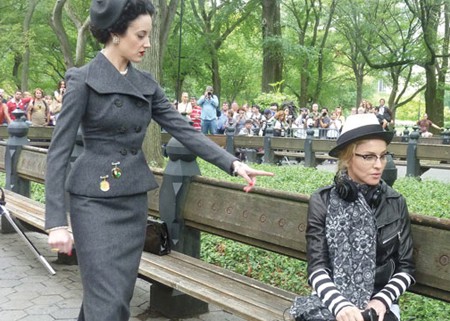 Madonna and Riseborough on the set of W.E.

Her passion for the story of Wallis Simpson, the woman for whom  the King of England abdicated his throne, is evident in every answer. She has a very clear point of view and wants to counter decades of stories which always focus on what the King lost and not what Wallis herself went through. "The thing i discovered the most about Wallis Simpson was really how much she tried to avoid the actual marriage taking place. How she saw the writing on the wall. And how she tried her best to get Edward/David to see the writing on the wall and see what they were both in store for. Obviously she couldn't talk him into her point of view. He was just c**t-struck as they say in England."

Another thing that appealed to her about the story is that each of the four principal characters are outsiders in their own worlds, their romances don't fit societal expectations, something gay audiences can surely relate to. "I think a lot of us feel like we don't fit in, strangely enough, that we don't fit into the conventional norm or what society expects of us. I think more and more and more people are redefining what makes a family, what makes a couple, what makes love, what makes romance, what are soulmates. All of these things we are reinventing this because family is what you make it."

She researched the story for three years while writing the screenplay and though the project has wrapped people are still bringing her bits and bobs. "I'm still discovering things about her and I'm sure I will for the rest of my life. I was actually going through my papers and boxes and my files the other day and I found an astrological reading that someone had done for me 30 years ago and I was reading it and the woman was talking about some aspect of my personality and she quoted Wallis simpson. So i thought how weird. She was already part of my life. You know what I mean? That was a little foreshadowing." It's a quote she actually used in the film "all for love and the world well lost".

Even when the questions in the room stay close to the film, it's clear the questions are also about Madonna. She's prepared for a question about the similarities between Wallis Simpson and Eva Peron, another fashionable historical icon who she'll forever be associated with. 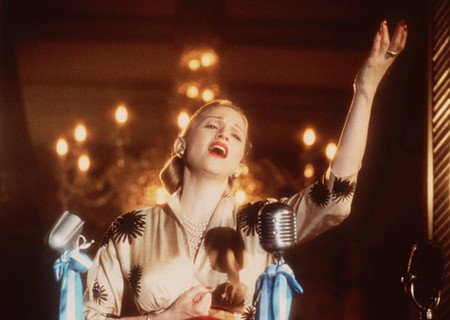 "What they have in common is what many people have in common who are public figures who become iconic and who have some kind of historical impact. Especially strong women. I think people have a tendency to feel intimidated by the strength of these women. In order to deal with them a lot of people who write history books and humanity in general have a tendency to diminish women or undermine their accomplishments or try to portray them as heretical, evil, in possession of some kind of sorcery, to undermine their strength or accomplishments or their intelligence." Even before she's done answering the question you can see Madonna bracing for the follow up. Has she ever felt this way? 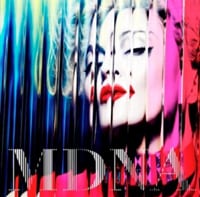 So we're back to Madonna again. The Super Bowl is coming, her new album MDNA, W.E. is playing in movie theaters. How would she define this era in her career?

"Busy," she blurts out bluntly to the delight of the room. Most questions get full paragraph answers but she knows when one word will do. She's always been a savvy entertainer.

She's soon whisked away from us, for the next room of reporters though she pauses first, momentarily confused that we're not the ones leaving the room now that we've paid our respects. All we have left of her is our memory of that iconic face, and her voice on our electronic devices, which is not unlike what she's always left us with if you stop to think about it. This time, though, we also have a story we'll be telling until our dying day, no matter how mundane the actual specifics. "I met Madonna."  Impossible but true.