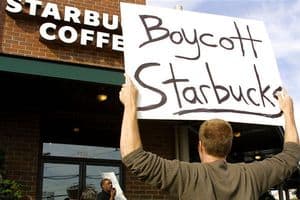 On Tuesday, Andy reported NOM's displeasure at Starbucks' endorsement of marriage equality. More wingnuts have since voiced similar sentiments, and now they're calling for a boycott.

There's more than coffee brewing at Starbucks. There's controversy too. Hello, I'm Tony Perkins of the Family Research Council in Washington, D.C. Starbucks is stirring the pot all right, but with a liberal agenda that's got customers shaking their heads. In the fight over marriage in Washington State, the Seattle company is picking sides. Last week, the chain announced it'll join the attack on marriage and endorse homosexual unions. Spokesman Karen Holmes said, "This important legislation is aligned with Starbucks business practices… It is core to who we are and what we value as a company." Well, it may be at the core of who Starbucks is, but it's not at the core of who America is. Voters overwhelmingly believe in man-woman marriage–and they've passed 30 straight amendments to prove it. If Starbucks thinks people like their radical agenda, I hate to spill the beans. But people can get their caffeine fix anywhere. So if Starbucks wants to focus on politics, then its profits are on dangerous grounds.

“Christians are upset with Starbucks for turning against God, but we are glad to know that Starbucks doesn’t pretend to be for Christians,” said Pastor Steven Andrew, who is president of USA Christian Ministries. He calls every Christian and church to boycott Starbucks. Leviticus 18:22 says, “You shall not lie with a male as with a woman. It is an abomination.”

“This boycott is important because God blesses those who obey Him and judges those who don’t obey Him (2 Chronicles 19:2),” he adds.

Don’t expect to hear sermons with “grab your Starbucks” or to see Starbucks served at churches. “Starbucks is no longer fashionable. If your church still uses Starbucks, then your pastor is a friend of the world,” he adds. God calls those who oppose Him “haters of God” (Romans 1:30).

It is hoped that Christians will quickly share this boycott with their church.

A curious point: As HuffPo points out, Starbucks is joined in supporting marriage equality by Microsoft and Google. Why aren't Rev. Andrew and Tony Perkins calling for a boycott of those companies? Too inconvenient? You know, once upon a time, the True Believers could build arks and part seas and roam the desert with naught to eat but manna from heaven. If nowadays they can't even abide a few months without operating systems and search engines, I say they're not very serious about this whole "faith" thing at all.