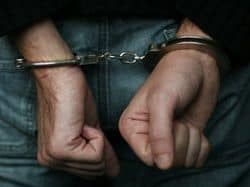 Those who toil in competetive industries often discuss their work using hyperbolic language. (Recall Mitt Romney's recent promise to bloody the nose of President Obama, and Newt Gingrich's subsequent promise to not just bloody the First Schnoz, but to knock the President unconscious.)

Well — if you're a Muslim, hold your tongue. According to the AFP, a Muslim businessman in Canada was recently arrested and briefly imprisoned after authorities intercepted a text message in which he told his sales staff to "blow away" the competition at a New York trade show.

Moroccan-born Saad Allami, who works as a telecommunications company sales manager, was arrested three days after he sent the message in January 2011 and detained while police searched his home, said the Muslim Council of Montreal.

"The whole time, the officers kept repeating to the plaintiff's wife that her husband was a terrorist," said court filings in a lawsuit filed by Allami, cited by local media. Allami was released after four hours of questioning.

Mr. Allami's not taking this treatment lying down. He's not seeking over $100,000 in damages from the Quebec provincial police. His day in the Quebec Superior Court arrives in early March.