'One Million Moms', who last month went after JC Penney for hiring "open homosexual" Ellen DeGeneres as its spokesperson, has turned its attention to 'Toys R Us', threatening the toy chain with a boycott if it refuses to remove an Archie comics issue featuring the wedding of its gay character Kevin Keller from store shelves, Right Wing Watch reports.

'One Million Moms' is a project of the American Family Association, which has been designated a hate group by the Southern Poverty Law Center. 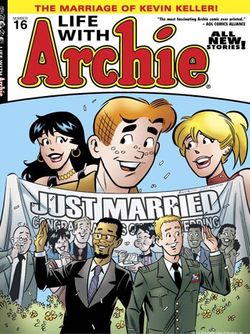 Toys 'R' Us employees do not actually set up the displays; they leave this up to the vendor, but they should be aware of the merchandise being sold in their stores nonetheless. These comic books are sold at the front checkout counters so they are highly visible to employees, managers, customers and children. Unfortunately, children are now being exposed to same-sex marriage in a toy store. This is the last place a parent would expect to be confronted with questions from their children on topics that are too complicated for them to understand. Issues of this nature are being introduced too early and too soon, which is becoming extremely common and unnecessary.

A trip to the toy store turns into a premature discussion on sexual orientation and is completely uncalled for. Toys 'R' Us should be more responsible in the products they carry.

Says the sample letter that 'One Million Moms' tells its followers to send to Toys R Us, in part:

"As a mother and a member of OneMillionMoms.com, I am extremely disappointed to learn that select Toys 'R' Us stores are now selling 'Archie' comic books with a same-sex wedding displayed on the front cover. I am referring to the ones where the front cover reads "Just Married" with two men marrying, one wearing a service uniform….Please remove all the same-sex "Just Married – Archie" comic books immediately from your shelves. My decision to shop in your stores depends on it."