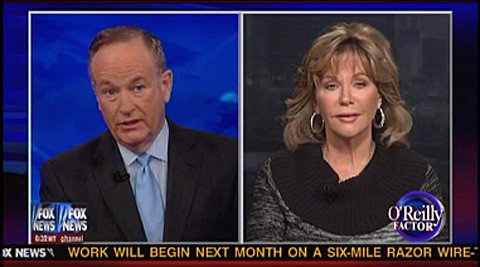 FOX News host Bill O'Reilly couldn't find one of the One Million Moms protesting Ellen DeGeneres to come on his show and talk about their calls for JC Penney to fire her as spokesperson because she's an "open homosexual", so he found another wingnut, Sandy Rios of Family-Pac Federal, to come on and defend them.

O'Reilly calls the One Million Moms action a form of McCarthyism and a "witch hunt".

Says Rios: "It isn’t about Ellen Degeneres, but it is about mainstreaming something that is not acceptable to Christian and traditional family people all over the country."

Says Rios: "The problem is that Ellen DeGeneres has chosen to act out her lesbian lifestyle, marry her partner, and what that represents…we are seeing homosexuality so embedded in our culture in alarming ways.”