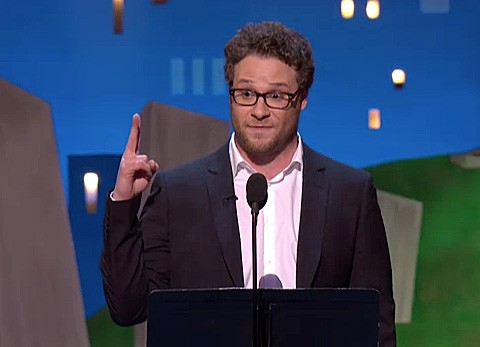 Seth Rogen hosted the Independent Spirit Awards in Santa Monica on Saturday, and took the opportunity to lay into Brett Ratner for the anti-gay slur that got him rejected as Oscar producer last fall. In the same joke, he also took aim at Grammy producers for celebrating Chris Brown.

"Without awards season we wouldn't know what a horrible bigot Brett Ratner is. It's good. Good to know. That Ratner sh*t was crazy. That was nuts. Are we really surprised that he said that though, honestly? Come on. Who was like, 'Ratner? I thought Ratner was Mr. PC, that's weird.' It's very strange though. That was crazy."

"I honestly bet, though, that Brett Ratner wishes that he was organizing the Grammys, because they seem much more forgiving than the Oscars, altogether. Seriously. You say a few hateful things they don't let you within 100 years of the Oscars. You could literally beat the sh*t out of a nominee and they let you perform twice at the Grammys."

The mark above comes at about 5:00 into Rogen's opening monologue, AFTER THE JUMP…