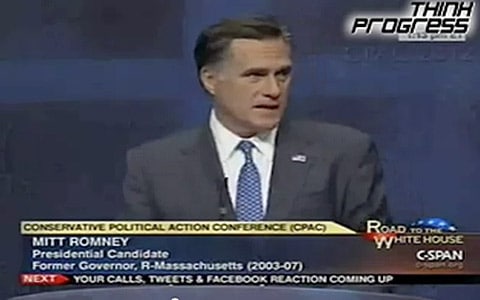 In his speech to CPAC this afternoon, Mitt Romney promised to defend DOMA and push for an amendment to the Constitution banning same-sex marriage. He also boasted about his record in Massachusetts, Think Progress LGBT reports.

Said Romney: "I fought to have a stay on that decision, then pushed for a marriage amendment to our Constitution. We lost by only one vote in the legislature. And I successfully prohibited out- of-state couples from coming to our state to get married and then going home. On my watch, we fought hard and prevented Massachusetts from becoming the Las Vegas of gay marriage."