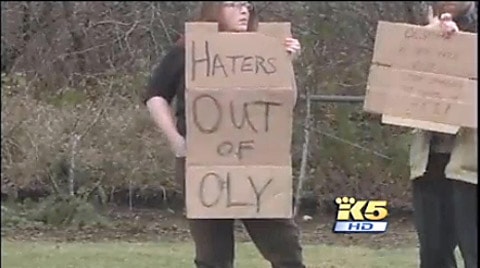 Rick Santorum, now seen by some as the GOP frontrunner and the first presidential candidate to visit Washington state in the 2012 election cycle, met with anti-gay pastors in Olympia within hours of Governor Chris Gregoire signing the state's marriage equality bill. 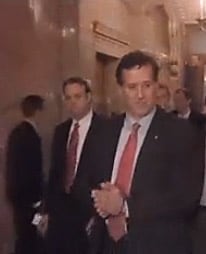 He told them not to give up, the Seattle Times reports:

"I encouraged them to continue the fight," Santorum said. "There are ebbs and flows in every battle, and this is not the final word."

The former Pennsylvania senator said the law waters down marriage at a time when divorce rates are already up. He argued that there are societal consequences without strong traditional marriages, including more people going to prison, more dropouts from school, higher poverty rates and higher government spending.

Still, Santorum said the debate needs to be respectful on both sides, indicating that supporters of same-sex marriage have fair points to make, too.

Two new national polls out today suggest Santorum is a candidate on fire, soaring to the top of the Republican race and now in a statistical tie with Mitt Romney for the lead. What is significant here is Santorum’s momentum.  He is surging nationally (up 14 points in seven days in one poll) just as the primary battle is about to become more of a national race with 18 states holding primaries or caucuses over the next month. I would argue that these two new polls tell us more about the direction of this race than Romney’s 194-vote victory over Ron Paul this weekend in the Maine caucuses.

Watch a news report on Santorum's visit to Washington state and his meeting with the anti-gay pastors, AFTER THE JUMP…