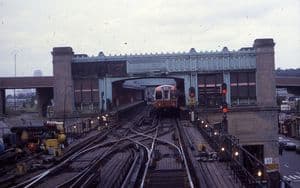 Here's what happened. A Caucasian gay dude in Boston was either entering or departing the Forest Hills T station. In the stairwell he bumped into, or was bumped into by, three African American lesbians. The ladies allege he said something racist to them; he alleges they used homophobic slurs against him. In any event, a scuffle ensued, and the man was severely beaten and left with a broken nose. He called the police. The ladies were arrested. The man claims he's the victim of a hate crime.

From The Boston Herald:

“My guess is that no sane jury would convict them under those circumstances, but what this really demonstrates is the idiocy of the hate-crime legislation,” said civil liberties lawyer Harvey Silverglate. “If you beat someone up, you’re guilty of assault and battery of a human being. Period. The idea of trying to break down human beings into categories is doomed to failure.”

“Someone who is Jewish can be anti-Semitic,” said ACLU staff attorney Sarah Wunsch. “The mere fact that someone is a member of the same class doesn’t mean they could not be motivated by hatred for their very own group.”

After their arrest, the three women, all of whom are in their late teens or early 20's, were released on bails ranging from $100 – $500 — low sums which, according to defense attorney C. Harold Krasnow, indicates the that the prosecution's case is "weak."