The Washington House will vote on a bill to legalize same-sex marriage at 1 pm tomorrow. The Senate passed the bill last week in a 28-21 vote. The bill is expected to be passed in the House and Governor Chris Gregoire will sign it. 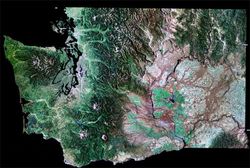 Opponents of gay marriage are gearing up to challenge SB 6239 with a referendum on the Nov. 6 ballot. Advocates with the evangelical Faith and Freedom Network, led by Gary Randall, and others plan a referendum once Gregoire signs it, and they face a June 6 deadline for signatures.

The Office of the Secretary of State in Olympia says that if opponents’ signature-gathering falls short, the bill would take effect June 7 – or as soon as signature counts were completed, if needed. But if gay-marriage foes can meet the requirement for a little over 120,000 valid voter signatures by the deadline, they would force the matter onto the Nov. 6 ballot and put the law into abeyance until the election is certified.

Previous Post: « Hot Movie Moment Denied! No Songs at the 84th Oscars
Next Post: Ellen DeGeneres Rips ‘One Million Moms’ For Calling for Her Firing: VIDEO »