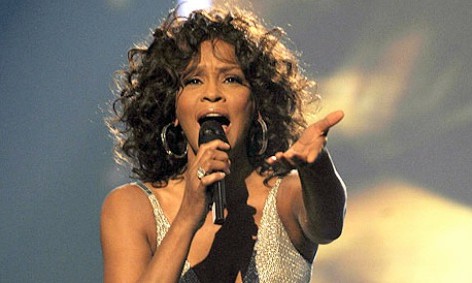 There's still no word on the cause of Whitney Houston's death this afternoon, but the LA Times has pretty thoroughly described the circumstances surrounding it. Whitney died in Los Angeles, in the Beverly Hilton. She was in town to attend a tribute to Clive Davis, and intended to join the revelries at Mr. Davis's pre-Grammy party this evening. She was found in her hotel room by a body guard, who called for paramedics at approximately 3:30 p.m. The paramedics performed CPR for 20 minutes, and Whitney was pronounced dead at 4:00 p.m. She is survived by her 19-year-old daughter, Bobbi; her mother, Cissy Houston; her cousin, Dione Warwick; her godmother, Aretha Franklin; several hundred million fans; many others.

Personal note: Since I heard about Whitney's death I've been thinking a lot about her botched comeback tour of 2010. It was called Nothing But Love, but from its disastrous first night it drew almost nothing but snark from the press. A typical notice, this one from the Evening Standard:

… that fabulous voice is utterly, utterly torn to shreds.

Where once she soared, now she wheezes and croaks, bludgeoning her perfect pop single I Wanna Dance (With Somebody Who Loves Me) into karaoke submission; stripping the moving My Love Is Your Love of all emotion and inflicting grisly carnage on I Will Always Love You (if she is late-period Judy Garland, this is her Over The Rainbow).

"My soprano friend doesn't wanna come tonight," she mumbled after missing yet another note. Neither did her contralto or mezzo-soprano “friends“.

(The reviewer ended by calling the night "heartbreaking," but it's hard not to detect a little glee in that last set of quotation marks. A lot of people wrote things like that, and it's a little queasy-making to think how many of them will be airing sweet sentiments in the coming days; sentiments which are now about six hours out from the last moment when they could have done some good.)

Anyway — Whitney's singing came under a lot of fire in her last few years, but I hope it's not too early to hope for a critical reappraisal. In the 80's and 90's, Whitney's instrument was a natural marvel. She didn't have to do anything with it. She opened her mouth and there it was; making sounds bigger and better than any other sounds in the world. Interpretation? Nuance? Whitney's singing couldn't contain those things, because the songs she sang couldn't contain her magnificent voice. But on Whitney's last record, and in the concerts she gave to promote it, none of that was true. Singing "I Look To You," she wasn't just a voice. She barely had a voice. She was a woman. A little sad, more than a little tired, and — if her endless, loopy onstage banter was any sign — absolutely terrified that those natural gifts upon which she had built her career and identity had abandoned her forever. All of this came through in her singing. If music is judged by how much weight and wisdom and emotion can be supported by a single sung word (and I dig Patti Smith and Maria Callas, so I think it is), then in those last concerts Whitney made some of the most beautiful music of her life.

Watch Whitney sing "I Look To You" AFTER THE JUMP …