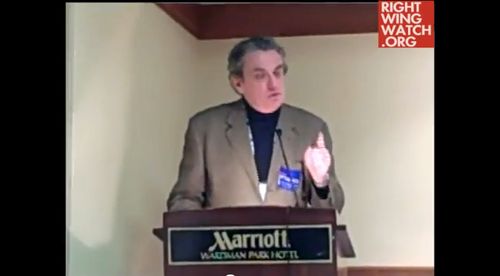 Yea gods, this is the ugliest video from CPAC so far. In it, Austin Ruse explains why mere studies into countries' summary execution of LGBTs is dangerous and wrong.

Austin Ruse is the head of the Catholic Family and Human Rights Institute, or C-FAM, and he used to be hip. He apparently wrote for Rolling Stone. Nowadays he's a Catholic scold, running his organization and writing despairing bi-monthly columns for TheCatholicThing.org. In one such column, "Are Urophilia and Partialism Human Rights?", he upbraided the French government for:

… on the grounds that:

… Do you happen to know how many sexual behaviors the American Psychiatric Association has identified? Twenty-three.

They include the usual and now sadly ho-hum heterosexuality, homosexuality, bi-sexuality, and transgenderism. But the list also includes something called “frotteurism” which is the “touching and rubbing against a non-consenting person.” Also included is something called “autogynephilia” which is “the sexual arousal of a man by his own perception of himself as a woman or dressed as a woman.” There are others like “telephone scatalogia,” “urophilia,” “coprophilia,” and “partialism.” You don’t need to know about any of these.

Is it so hard to imagine how far U.N. experts would eventually go in defining the phrase “sexual orientation?” Dare I say that this is the slipperiest of slopes?

Of course, he included the usual concessions to ordinary human decency:

It’s true that some countries have unacceptably draconian laws, including the death penalty, for homosexual behavior. But this exists in only a few countries and is to be condemned.

… but Ruse hasn't written any columns about that. The most distressing trait of homophobes: They are more outraged by LGBT's influence than by their murder.

Anyway — the video, which RightWingWatch has helpfully transcribed. Ruse is addressing an audience at CPAC, and he says:

In 2010 there was a debate about summary execution that entered sexual orientation and gender identity into the equation, that was defeated and then it was accepted, and then the Human Rights Council last summer called for a report on violence against homosexuals. This was hard fought, it was barely lost, and the reasons that countries oppose this idea, ‘what’s wrong with having a study on violence against homosexuals,’ it’s because they’re introducing language which we know is just the nose of the camel under the tent. When this vote took place calling simply for a study, it was heralded in the New York Times as a great victory for human rights of the LGBT community, it was nothing of the sort. It was a vote to have a study. See, this is the drumbeat that they use, ‘oh it’s a victory for human rights’ and then it happens again ‘and it’s another victory for human rights’ and it happens again ‘and it’s another victory for human rights,’ and the water gets warmer and warmer and warmer until the frog is boiled. This is their theory of international law: their theory of international law is that it’s done by lying, coercion and trickery. [emphasis added]

Watch the video AFTER THE JUMP …