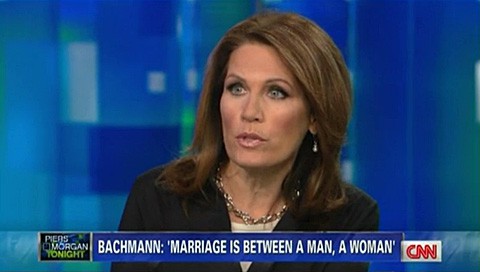 Last night I posted a preview of Michele Bachmann's interview with Piers Morgan in which she called hinm "absolutely rude" for suggesting she judges gay people. Morgan continued to pursue that line of questioning, telling Bachmann that it's the rhetoric she uses that is dangerous and offensive.

When asked if she agrees with Cameron's comments that homosexuality is detrimental, unnatural and destructive to society, Bachmann says:

"Honestly, I think I've had enough of the conversation. It's time to move on. I think we've beaten this horse to death."