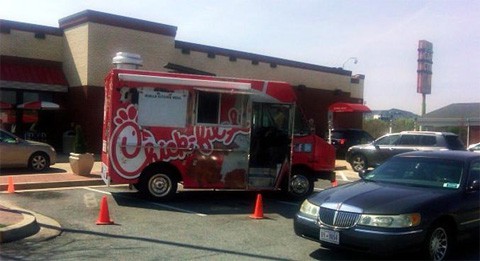 A Chick-Fil-A truck is on its way to Washington D.C. and is stirring up a online battle after DCist posted a tweet heralding its arrival and got a swarm of attacks:

DCist did not hang its head in shame. On Tuesday, DCist's editor Martin Austermuhle put up a new blog post describing his reasons for reporting on Chick-Fil-A's food truck coming to the District (because it's news) and his surprise when detractors took to the Internet to lambaste DCist for publishing this news. He also engaged in some meta-analysis about how to some people food and politics are inextricably linked while others do not vet the politics of their eating establishments.