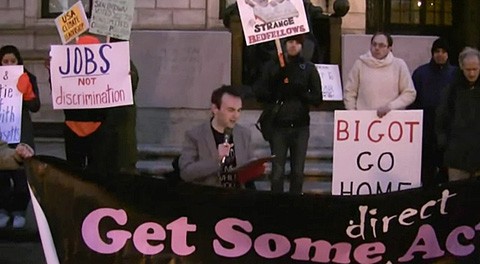 Demonstrators angry about Chris Christie's veto of a marriage equality bill condemned the New Jersey governor when he arrived in Boston last night to endorse Senator Scott Brown at a fundraiser.

About 50 people showed up in Boston’s Copley Square on the frigid evening of Monday, March 5, 2012 to speak out against the appearance of New Jersey Governor Chris Christie at a fundraiser for Republican Senator Scott Brown at the Westin Hotel. Christie angered equality advocates across the country on February 17, 2012 when he vetoed legislation which would have allowed same-sex couples to marry in the Garden State. The New Jersey Assembly passed same-sex marriage legislation by a vote of 42-33; the State Senate approved the bill on a vote of 24-16.

JTIMA Clerk Don Gorton emceed the event and pointed out that Christie’s appearance underscored Senator Brown’s stubborn opposition to marriage equality. “Bigots of a feather  …” read one of the signs held up by protestors. Gorton said Christie’s veto was a temporary setback on an “inexorable path” to full federal equality. Gorton denounced the national Republican Party as an “obstacle” to LGBT equality.  “Same-sex marriage is the civil rights issue of the 21st century,” Gorton concluded. Activists will continue the fight as long as it takes.

Other speakers included James Croft of JTIMA and the Harvard Graduate School of Education; John Affuso, Political Co-Chair of the Boston Steering Committee of the Human Rights Campaign; and Ethan Harrison, Co-Chair of JTIMA. Mass Uniting and Jobs for Justice co-sponsored. The protest coincided with a separate demonstration calling attention to the financial support Brown receives from big oil and his opposition to measures to stop climate change.

After the speeches, protestors from both groups marched across Huntington Avenue to the sidewalk in front of the Westin Hotel, where they held signs denouncing Christie and Brown and chanted. A popular refrain was “Chris Christie Go Away/You’re Not Welcome in MA.” Attendees at the Scott Brown fundraising reception watched the protests from the windowed reception room on the 3rd floor of the Westin’s Copley Square location.