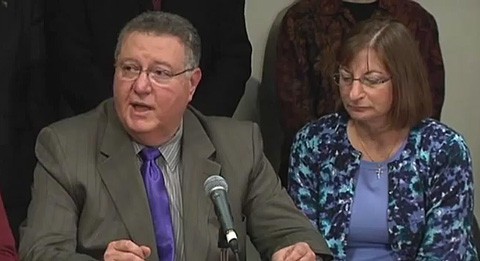 I missed this clip on Friday of Tyler Clementi's parents' statement on the Dharun Ravi verdict.

In related news, Michelangelo Signorile writes at HuffPo about why the verdict was just:

The jury did exactly as it was instructed to do, looking at the law and the 15 counts and returning with a guilty verdict on all of them. Ravi did spy on Clementi, thereby violating the invasion of privacy law. He did tamper with the evidence later, trying to delete text messages and tweets, knowing what he'd done. And all of the evidence shows that he did attempt to intimidate Clementi on the basis of his sexual orientation — and he succeeded — which was the basis of the hate crimes counts.

No jury that thought long and hard about the case could have returned with any other verdict. It is not the jury's job to think about sentencing or punishment. It is its job to follow the law.

We've seen too many cases in the past where juries didn't do that, where they accepted the "gay panic" defense, as well as its cousin, the "trans panic" defense — in which defendants get sympathy for harboring feelings that many in society, presumably including jurors, also harbor, even if all believe those feelings are wrong.

Watch Clementi's parents AFTER THE JUMP…

Previous Post: « Ellen Returns to Her First Job: VIDEO
Next Post: Questions No One Knows The Answers To: VIDEO »