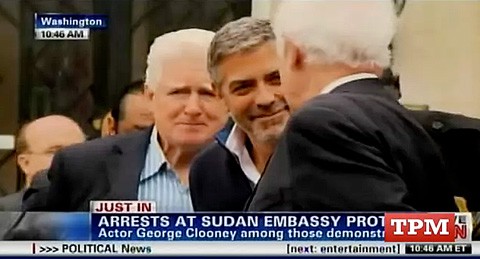 George Clooney was arrested today outside the Sudanese Embassy today, the WaPo reports:

Before their arrest, the assembled group of congressmen, religious leaders and cultural icons spoke about the humanitarian crisis faced by hundreds of thousands of Sudanese who have been prevented from receiving international aid by president Bashir.

Clooney and the group of protesters stepped onto embassy grounds after giving short speeches, at which point they were instructed that they must leave or be arrested. On the third warning, officers told the group they were under arrest, and the protestors lined up to get handcuffed and were removed to a waiting van

Watch a clueless CNN anchor narrate the arrest, AFTER THE JUMP…