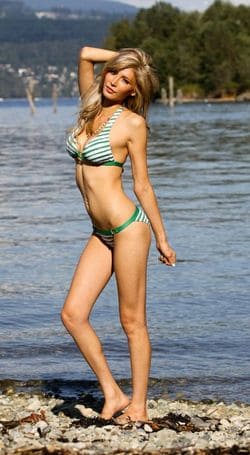 Jenna Talackova is 23 years old and stunning — she looks like a taller, more elfin Gwyneth Paltrow. She was born with male body parts, but says she knew she wasn't a boy by the age of four. She began hormone therapy at 14 and underwent gender reassignment surgery at 19.

In 2010 she was a finalist in Thailand's Miss International Queen, a beauty pageant for transsexuals. This year she was one of 65 Canadian Miss Universe finalists — until the pageant's governing body found out about her past. Then the Canadian Miss Universe website disappeared from the web for several hours, and when it resurfaced it had been scrubbed of every mention of Ms. Talackova. From CTV News:

Miss Universe Canada issued a statement Friday saying Talackova "did not meet the requirements to compete despite having stated otherwise on her entry form."

"We do, however, respect her goals, determination and wish her the best," it said.

It is, however, unclear which "requirements" Ms. Talackova failed to meet. As noted at Dear Pageant Girl, the Canadian pageant website says only:

… To qualify for the 2012 competition, you must be a Canadian Citizen and at least 18 years of age and under 27 years of age by February 1st, 2012. If you meet the basic requirements, we’ll be sending you an application form to participate in a Casting or Local pageant to select the finalists for the Miss Universe® Canada pageant.

TMs. Talackova hasn't yet released a statement, though she tweeted on Friday that she has been discriminated against unjustly, and will be speaking with a lawyer.

Watch Ms. Talackova chat up a leering interviewer AFTER THE JUMP, in a two-year old vid from the Thai pageant. Ms. Talackova first appears around the 7:30 mark.