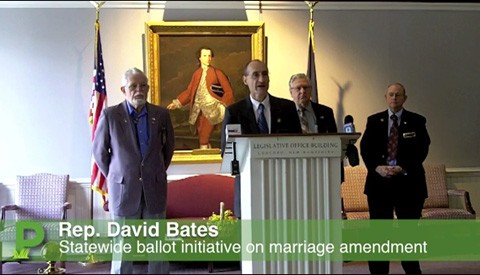 New Hampshire Rep. David Bates (R-Windham) is sponsoring an underhanded bill that would roll back the state's marriage equality law, replacing it with civil unions, and then allow voters to weigh in (in a "non-binding" way) about whether they like that or not.

Said Bates to the Concord Monitor:

The legislature would vote to repeal marriage equality and implement the civil unions law as it was passed in 2007, a change that would not take effect until March 31, 2013. This would require a super majority, because Gov. John Lynch (D) has promised to veto any bill that takes rights away from same-sex couples.

In the meantime, voters would have the opportunity to respond to a non-binding question as to whether they agree with the decision. The vote would have no legal impact, but would indicate to lawmakers essentially whether voters like the repeal or not.

If voters approve the repeal, it proceeds as planned next March. If they reject it — and polls show a strong majority opposes Bates’ bill — then the legislature would have to act again before March to overturn its own repeal, but would be under no obligation to do so.

The question as it would appear on the ballot conveniently does not address marriage: "Shall New Hampshire law allow civil unions for same-sex couples and define marriage as the union of one man and one woman?"

Bates' plan, of course, would let him ignore the results if they don't go his way and proceed with the repeal.

Bates's bill, which is set for a vote next Wednesday, now includes a question to be put before New Hampshire voters on the November ballot: "Shall New Hampshire law allow civil unions for same-sex couples and define marriage as the union of one man and one woman?"

"In November, we can find out, unequivocally, once and for all, what the citizens of New Hampshire believe and what they want regarding marriage and civil unions in our state," Bates said. "There will be no more guessing, no more arguing or debating over dueling polls, just the actual voice of the people telling us what their will is on this issue."