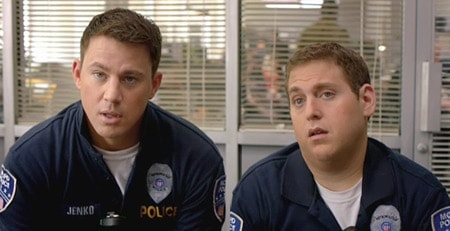 Chan and Jonah are clueless cops in "21 Jump Street"

"High concept" was the hot showbiz term of the 1980s. The thinking went that if you couldn't describe your movie/tv show in one sentence, it wouldn't sell. That popular marketing wisdom stuck and High Concept itself shrank. First it devolved into This meets That, each new pitch being a mashup of preexisting hits. Today instead of one sentence pitches or previous hit fusions most new potential blockbusters are required to rely on a simple colon. It works like so… "Title of That Thing You Already Know: The Movie! "

This has led to all sorts of unfortunate movies based on books, games, plays and tv shows (and vice versa) many of them big hits. The danger is obvious. When you don't even have to try to make your entertainment memorable because the audience brings half the affection with them, creative laziness can often follow. But every once in awhile the audience gets lucky and Title of That Thing You Already Know: The Movie is surprisingly fun on its own terms. 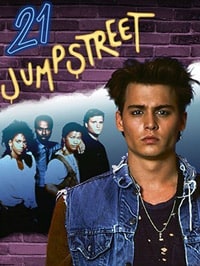 And now it's a 21 JUMP STREET: THE MOVIE (the last half of that title is silent/implied) The twist is that rather than the earnest though light-hearted procedural drama it was in its infancy as it introduced Johnny Depp to the world in 1987, it's now a full fledged buddy comedy starring Channing Tatum and Jonah Hill.

The new version actually begins in high school where we meet Chan as "Jenko" a dumb popular jock and Jonah as "Schmidt" a geeky schlub. 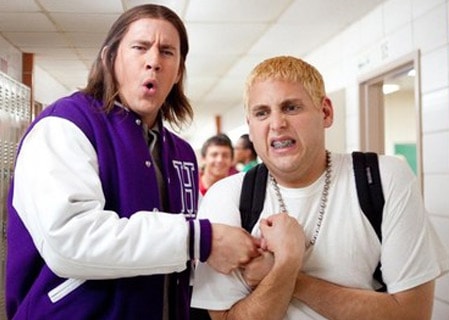 In the prologue we learn that they hated each other in high school and neither attended the prom; Jenko because he couldn't keep his grades up and Schmidt because he couldn't get a girl. They become best friends once they're both in training to become cops. After one fuck-up too many on the police force they get sent back to high school to pose as students and bust a drug ring. The man giving them the self-referential marching orders in the first of the film's fun cameos is the ever dependable Nick Offerman (Parks & Recreation).

In high school (the second time around) the guys get their secret identities mixed up with disastrous funny results, essentially forcing Jenko to hang with the brains and Schmidt with the cool kids led by drug dealer Eric (smirking hot Dave Franco) and open hearted funny Molly (Brie Larson). Will Schmidt and Jenko find the supplier? Are they destined to relive all their old high school mistakes?

The best thing that can be said for 21 Jump Street, beyond the smart foundational move of refusing to take itself seriously, is that it never coasts on just one type of joke. Many lesser efforts would stop thinking beyond 'ha! they're old and don't realize what's cool anymore!' but the new movie is funny in execution, not just in concept. There are a wide variety of jokes from the slapstick, sexual, social, pop culture and self-deprecating bins. Not all of the jokes land but the ratio is pretty good. It's often totally juvenile bro humor (yes, there are a few gay jokes… though they're not mean-spirited) but there's something sweet goofy about the tone preventing it from being only another raunchy R rated comedy. 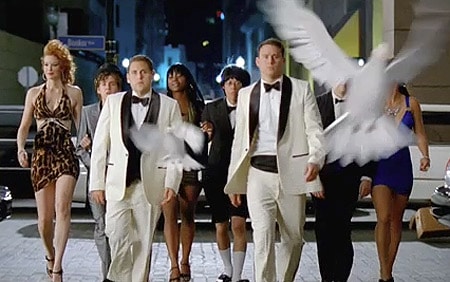 21 Jump Street has a welcome number of surprises for a comedy that is essentially entirely predictable. You know from the very first scene that the movie will end at the prom. The immature cops know how to make an entrance for the grand finale (Bring your own doves) and thankfully 21 Jump Street (:The Movie) knows just how to make an exit. It wraps up at a relatively trim 109 minutes with, what else, a dumb sequel joke.

Previous Post: « Contrary To Previous Reports, The President Has No Opinion On NC Marriage Amendment
Next Post: Legislature Gets Its Way; LGBT Youth Group Will No Longer Sell License Plates »