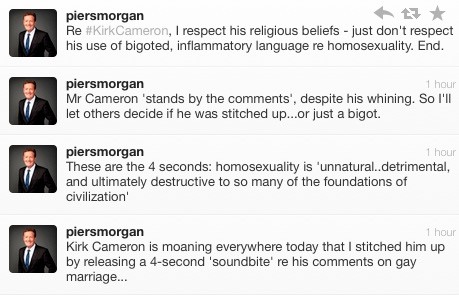 Following Kirk Cameron's mini media blitz this morning during which he claimed to be victimized by Piers Morgan over anti-gay remarks he made during his CNN interview, Morgan blasted back at Cameron on Twitter.

"Kirk Cameron is moaning everywhere today that I stitched him up by releasing a 4-second 'soundbite' re his comments on gay marriage…These are the 4 seconds: homosexuality is 'unnatural..detrimental, and ultimately destructive to so many of the foundations of civilization'…Mr Cameron 'stands by the comments', despite his whining. So I'll let others decide if he was stitched up…or just a bigot…Re #KirkCameron, I respect his religious beliefs – just don't respect his use of bigoted, inflammatory language re homosexuality. End.