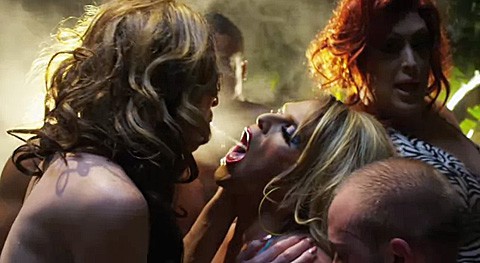 Drag queen Willam Belli (center) talks to EW about the Chick-Fil-A Wilson Phillips parody that went viral yesterday and how the video came about:

"Well, I wasn’t a big Chick-fil-A fan, I guess, I never really knew about them because I’m from Philly and they don’t have them there. I was eating there with my girlfriends and they were telling me how [they support anti-gay organizations]. I was like, “Oh that sucks about the gay thing.” And then, I got diarrhea from it, so I was like, 'F— this, I’m gonna write a song.' The fact that they come after gay people, let me come for you. The worst endorsement for a Christian chicken eatery is three drag queens. So it’s like, 'Alright, alright, boo.' In reality, I just wanted to wear a bobbed wig."

Willam also talks about the events that went down (spoilers) on last night's Drag Race.

You may have missed…
Drag Queens 'Chow Down' at Chick-Fil-A in Wilson Phillips Spoof: VIDEO [tr]