Rachel Maddow talks to Newsweek/Daily Beast about being outed to her very Catholic family by the school newspaper at Stanford, which promised they wouldn't run an article in which she outed herself before she told her family, which the paper did. Maddow says she still feels burned, and angry at herself for putting herself in that position: 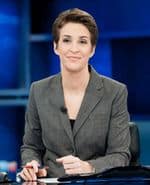 It took a while for them to get over it. My family’s very, very Catholic, so that was part of the initial upset. But I actually think that having a really strong faith is part of the reason they got over it—despite Catholic teaching being very antigay. Having a faith tradition was helpful for them and gave them the strength to get over this difficult thing.