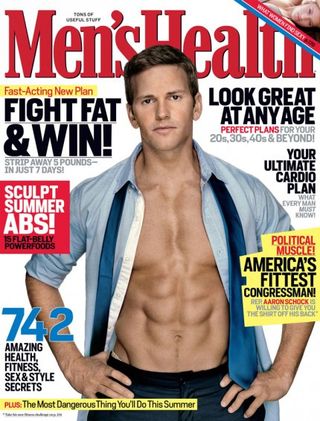 Schock, 30, purchased the P90X "Extreme Home Fitness" DVDs during the 2010 election cycle and classified them as a "healthcare" expense.

… which they are! And they obviously work! Nevertheless, after initially including the DVDs in an itemized campaign expense filing, the Schock campaign redacted the item. Curiously, according to Melanie Sloan, of Citizens for Responsibility and Ethics in Washington, the totals in the amended report didn't change after the redaction. Rep. Schlock's staff insist there was no wrongdoing, though Rep. Schlock himself admits to loving his P90Xs, which he heartily endorsed in a fawning cover story in an issue of Men's Health last year. From The Hill:

"When I first saw [P90X], I kind of laughed," Schock told the magazine. "I didn't think you could get a real workout from a DVD. But at 6:30 a.m., it helps to have somebody talking you through your workout."

The piece noted that Schock — Congress's youngest member — is one of about 12 lawmakers who exercise together using the program most mornings.

In the interview, he cited one of his favorite quotations, from Benjamin Franklin: "A good example is the best sermon."