Via press release from the IGLHRC: 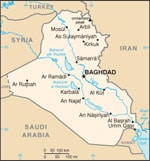 The International Gay and Lesbian Human Rights Commission has today received reports from Iraq of a wave of targeted killings of individuals who are perceived to be gay or lesbian. According to Iraqi human rights activists, in early February 2012, an unidentified group posted death threats against "the adulterous individuals" in the pre-dominantly Shiite neighborhoods of Baghdad and Basra. The threats gave the individuals, whose names and ages were listed, four days to stop their behavior or else face the wrath of God, and were to be carried out by the Mujahedin. According to sources inside Iraq, as the result of this new surge of anti-gay violence close to 40 people have been kidnapped, brutally tortured and murdered. The Iraqi authorities have neither responded to this targeted violence nor have they publically denounced it. It is widely believed that these atrocities are being committed by a group of the Shiite militia.

Today the Government of Iraq represents a fully sovereign and democratic country. As such, it must protect all of its citizens including lesbian, gay, bisexual and transgender people from hate-filled violence and death at the hands of armed militias. Vigilantes who perpetuate the targeted killing of those perceived to be gay or lesbian must not be tolerated in a new Iraq. We have seen these atrocities before. In 2009 vigilantes murdered hundreds of Iraqi individuals for their perceived sexual orientation. There are no excuses for such heinous human rights violations. We demand that the Iraqi Government put a stop to the wanton persecution and killing of gay people, and that the perpetrators punished.

Obviously, we'll be on the lookout for any further developments or confirmation…