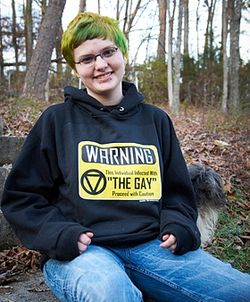 Elizabeth Garrett caused quite a ruckus at her Tuscaloosa, Alabama, high school in January by wearing a sweatshirt showing her gay pride: "Warning, This Individual Infected With ‘The Gay,’ Proceed With Caution."

It wasn't long of course before skiddish administrators told her to remove her hoodie. Soon after, they also announced that same-sex couples are prohibited from attending prom, so the Southern Poverty Law Center got involved and began rattling its litigious sabers.

After months of legal discussions and loads of bad press, the school system now says they will not only allow same-sex couples to prom, but will also let students where pro-equality apparel.

Tuscaloosa County Schools will allow its lesbian, gay, bisexual, and transgender (LGBT) students to attend prom with same-sex dates. The school district also has recognized the right of students to wear clothing with slogans expressing acceptance of LGBT people.
…
“Prom is an occasion that most students look forward to,” Elizabeth said. “I’m happy that I’ll get to go to prom for the first time. Although, I’m not a confrontational person, it was important to stand up for who I am and to speak out for other students.”

Statements supportive of LGBT people, as well as attending the prom with a same-sex date, are protected under the First and 14th Amendments of the U.S. Constitution. This is true even in communities that harbor anti-gay sentiment. LGBT students are increasingly living true to who they are and they deserve the respect and support of their schools.

“School officials should not be quick to ban speech expressing an opinion they simply dislike,” Wolfe said. “Banning such speech is usually a bad answer and can subject a school system to expensive litigation.”

Sadly, this likely won't stop other schools from discriminating against LGBT students, but at least it helps set a cultural precedent.