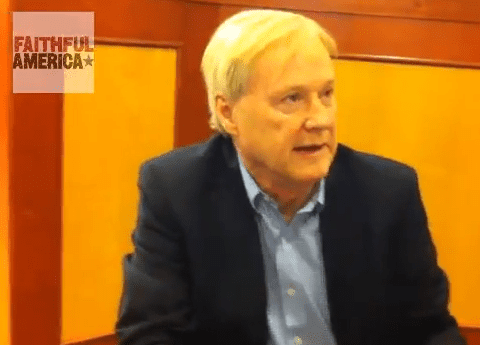 It’s typically Chris Matthews who’s dolling out the questions, but the MSNBC pundit was the one getting grilled during a recent book signing in Massachusetts, where gay Christians from Faithful America asked him why he consistently hosts anti-gay Family Research Council activist Tony Perkins, one of the people on GLAAD’s Commentator Accountability Project.

At a book signing in Framingham, Massachusetts, Faithful America members confront Chris Matthews about his consistently inviting Tony Perkins, President of the hate-group Family Research Council, on his show.

Matthews responds by falsely claiming that Perkins never says homophobic things on his show, but when challenged that his invitations give legitimacy to what Perkins says outside the show, Matthews has no answer.

Matthews also later claimed that every time Perkins is on, he’s challenged. But Matthews never challenges Perkins on his long record of hateful lies about the LGBT community.

Watch the video, via Joe.My.God, AFTER THE JUMP…