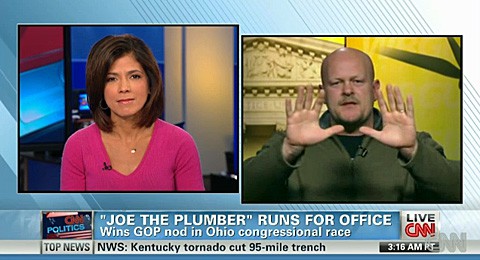 Zoraida Sambolin interviewed Samuel 'Joe the Plumber' Wurzelbacher this morning, who's running for Congress in Ohio, asking him what his qualifications are to lead the people.

Wurzelbacher held up his hands to show off his callouses and said "building houses, taking trees down, plumbing, and speaking at different events around the country" qualify him.

She then asked him about remarks he made in 2009. 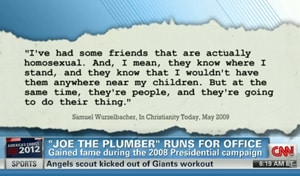 If you'll recall, he said this of same-sex marriage:

"At a state level, it’s up to them. I don’t want it to be a federal thing. I personally still think it’s wrong. People don’t understand the dictionary—it’s called queer. Queer means strange and unusual. It’s not like a slur, like you would call a white person a honky or something like that. You know, God is pretty explicit in what we’re supposed to do—what man and woman are for. Now, at the same time, we’re supposed to love everybody and accept people, and preach against the sins. I’ve had some friends that are actually homosexual. And, I mean, they know where I stand, and they know that I wouldn’t have them anywhere near my children. But at the same time, they’re people, and they’re going to do their thing."

Sambolin then pressed Wurzelbacher on whether he still held those same views. He said:

"I'm going to work towards all Americans – homosexual, straight. They want jobs. That's what it comes down to. I'm allowed to have my opinions as an American but it seems the left has become very intolerant when you have an opinion other than what they state."