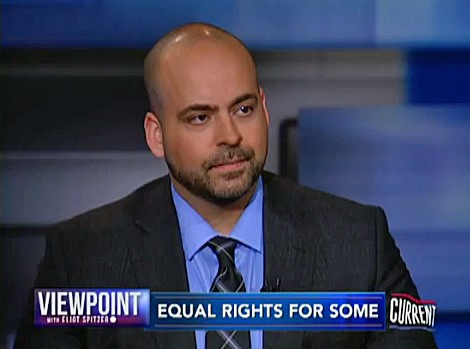 Freedom to Work's Tico Almeida, who spoke to Michelangelo Signorile in an interview I posted about earlier this morning about the White House's announcement that Obama won't sign an executive order protecting LGBT people from workplace discrimination, also spoke with Eliot Spitzer about the White House meeting he attended last week from which the news emerged.

Almeida describes how White House senior staff told them they were worried about a legal challenge from a conservative federal contractor, characterizing the meeting as a "slow motion train wreck" in which the representative White House counsel couldn't name one reason that signing the measure, which has broad political support, would put the Obama administration in danger legally.

Speaking politically, Almeida also sees it as a missed opportunity to corner Romney on the issue and "would have been a perfect opportunity to use this as a wedge against conservatives."

Check out the interview by Eliot Spitzer, AFTER THE JUMP…