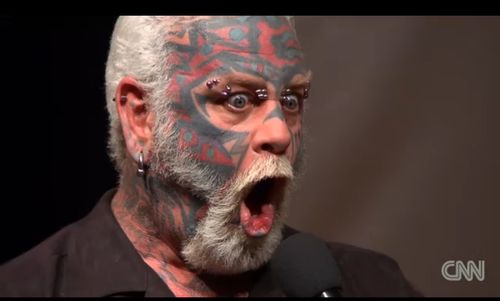 But! Somewhere in Minnesota, there's one school principal who thinks The Scary Guy is ineffective because he's only in the children's lives for a single day. Really confronting bullying, says this principal, involves greeting children as they arrive at school each morning with a high-spirited fist-bump. Or so CNN says he says. In any case, this principal thinks The Scary Guy is too mercenary, and CNN correspondent Randi Kaye thinks he's too weird; a judgment she communicates with careful deployments of the word "but," and phrases such as "and some think … "

At CNN.com there's a little more scary info on The Scary Guy. He's apparently failed to file taxes for a few years, which, when you consider that he's really just an unlettered tattoo artist with a weird freelance gig, doesn't seem so strange. But none of that made it onto The Scary Guy's TV segment. Which means Randi Kaye's Scary Guy date probably doesn't quite count as journalism, though it's certainly a fine attempt to frighten school administrators away from hiring one of the very few professionals whose job it is to fight bullying full-time. Good work!