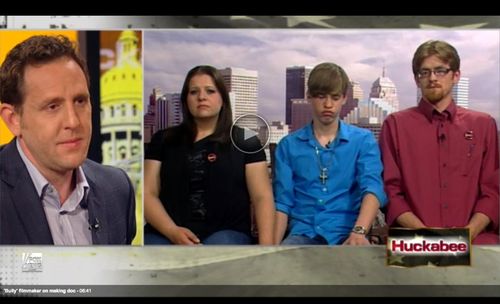 Mike Huckabee is very upset about the so-called bullying epidemic in America's schools, and he wants everyone else to be upset about it too. To that end, last week he brought Lee Hirsch, the director of the documentary Bully, onto his Fox program to talk about it.

And Hirsch did talk about it, but Huck talked a lot more. And while Huck said some very moving things about the evils of bullying and the importance of protecting children, it never occured to him to mention the teen population at greatest risk from bullying. Or maybe it did occur to him, but he didn't think the Fox audience could handle a mention of the "g" word. Or maybe he worried that mentioning the "g" word might lead to questions about who it is that creates a culture in which little "g" kids are likely to become the objects of ridicule. Awkward.