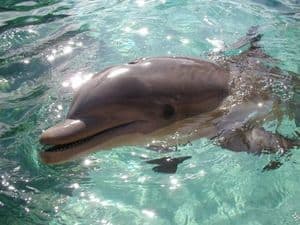 An "unprecedented study" of bottlenose dolphins conducted by the University of Massachusetts has discovered that dolphins — or at least this particular group of dolphins — swings both ways. They are bisexual, sometimes gay, and fiercely polyamorist.

Male bottlenose dolphins also were found to engage in extensive bisexuality, combined with periods of exclusive homosexuality. Male pairs, or even trios, cooperate to sequester and herd individual females during the mating season. Most males are also members of second order alliances consisting of 4 to 14 males. Such relationships appear to be long lasting, with one known 7-member group still intact after 17 years.

The study, conducted with a community of 120 adult dolphins in Shark Bay, off the western Australian coast, wasn't specifically looking for homosexual behavior in dolphins. Rather, it meant to study social patterns among smart, aquatic mammals who live without clearly defined borders to their territory. In addition to a lot of interesting info on the animals' mating habits, the study also learned that gayphins loathe physical confrontations, though they are rather snippy, and their social lives full of "constant drama."

Previous Post: « Outpouring Of Support For Family Of Daniel Zamudio: VIDEO
Next Post: NEWS: China Cracks Down, Republicans Crack Up, Literature Gets Fun »