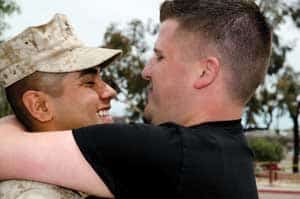 In what is believed to be the first marriage proposal between a gay couple on a U.S. military base, and both are war veterans. Navy Vet and San Diego resident Cory Huston proposed to Marine Avarice Guerrero as he returned from Afghanistan. 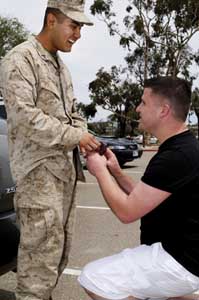 San Diego LGBT Weekly was there to photograph it, and writes:

April 24, under a bright Southern California sky at Camp Pendleton’s Camp Del Mar near Oceanside, Calif., a full two hours before his boyfriend’s return from the badlands of Afghanistan, Cory Huston waited nervously. Huston, who was discharged under the former Don’t Ask Don’t Tell policy, chain smoked as he rehearsed the simple proposal he would deliver when Guerrero would arrive.

He told LGBT Weekly that by popping the question, and assuming Guerrero would say yes, he would not only be changing his and his beau’s lives forever, but also the landscape of marriage among gay servicemembers…

…After a few minutes of emotional holding and kissing, Huston went anxiously down on one knee; looked up at Guerrero, who was dressed from head to toe in military fatigues; and produced an engagement ring and the time-honored phrase, “Will you marry me?”

Huston’s mild tremble, a result of hours and days of anticipation about this day, was quickly quieted by the one word every hopeful fiancé wants to hear: “Yes.”

Read the full account and more pics at LGBT Weekly.