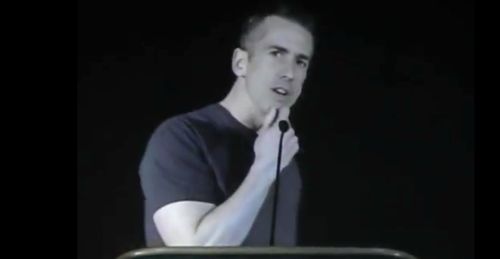 Yesterday, I posted a video of portion of a speech delivered by Dan Savage to a conference of high school journalists. Dan's speech was to be about bullying, and anti-gay bullying in particular, and Dan didn't bother being PC: He acknowledged up front that a lot of anti-gay sentiment comes from a literal reading of the Bible, and suggested that it is possible for Christians to learn to ignore that book's seemingly anti-gay sentiment, just as they ignore its prohibitions on the eating of shellfish and repeated endorsements of slavery.

This isn't an anti-Christian message. It's an anti-Biblical literalism message. But GOProud, just like the rightist media reporting on Dan's speech, seems to have missed that point. They released this statement yesterday:

Today, GOProud, a national organization of gay and straight Americans seeking to promote freedom by supporting free markets, limited government, and a respect for individual rights, condemned a speech given by left wing gay activist Dan Savage. "Dan Savage¹s outrageous anti-Christian tirade hurts, not helps, the fight for gay rights in this country," said Jimmy LaSalvia, GOProud Executive Director. "There is nothing incompatible between being a Christian and believing that all people should be treated equally, and Dan Savage¹s attacks on Christianity only fuel those on the extremist fringe who oppose gay rights.

… which is a rather gross mischaracterization of what occurred at Dan's speech, but oh well. GOProud's a political organization; good politics are its biz. Dan's a journalist, and his business is to tell the truth to the best of his ability. These ends are not always simpatico.