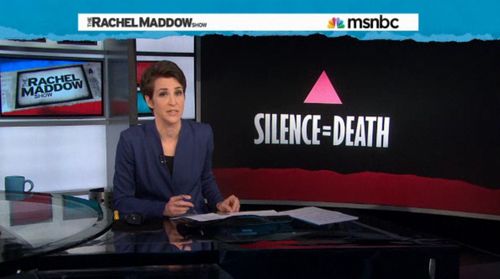 ACT UP celebrated its 25th birthday last week, and Rachel Maddow celebrated along with them. Did you know she used to be a member?

She did. And to commemorate the birthday, she and her people put together the excellent video below. It's got a lot of archival footage of ACT UP's many ballsy public actions, and ends on this note:

AIDS has killed more than 30 million people worldwide. Even in the United States right now there are thousands of HIV-positive Americans on waiting lists for treatment. On waiting lists for what are called the "AIDS drug assistance programs" in the States. Programs that do not have enough money to get HIV treatment to Americans who need it. In this country. in 2012.

With adequate treatment and healthcare, living with HIV can be a chronic manageable condition now. And that's mostly the way we think of it in this country now. Even though around the world, and even here at home, not everyone is there yet and more needs to be done.

But the reason AIDS can be a chronic manageable condition, the reason it is possible to imagine it ending, the reason ending it is in reach even now — in significant part is due to a very radical group called ACT UP, which I belonged to for a big, defining chunk of my life before I was ever in media. And which has a deserved place in American history that a lot of people will try to ensure never gets told. But it will be told.

Happy 25th birthday, ACT UP. You set out really aggressively and controversially to change the world. And you changed the world.