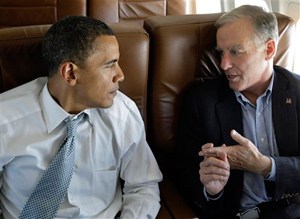 It's looking more and more likely that President Obama is going to have to address the ongoing push to include gay marriage in the Democratic Party's official platform.

After Nancy Pelosi, convention chair Antonio Villaraigosa, nearly two dozen senators and other high-ranking officials have called on the party to embrace marriage equality, there's now word that Howard Dean, Donald Fowler, Steve Grossman and David Wilhelm, all former chairs of the Democratic National Committee, are joining the effort being coordinated by Freedom to Marry.

Their statement, via Politico:

Obama, the ball's in your court. How are you going to play it?