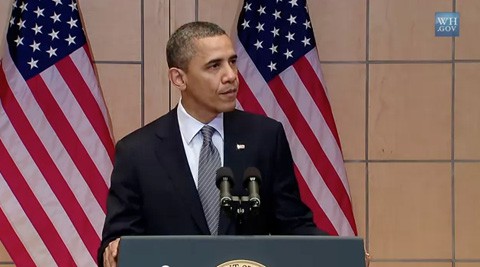 In a speech introduced by Holocaust survivor Professor Elie Wiesel, President Obama marked Holocause Remembrance Day with a speech at the Holocaust Memorial Museum in Washington D.C. Gay victims of the atrocity were among those the President noted in his speech:

I say this as a President, and I say it as a father.  We must tell our children about a crime unique in human history.  The one and only Holocaust — six million innocent people — men, women, children, babies — sent to their deaths just for being different, just for being Jewish.  We tell them, our children, about the millions of Poles and Catholics and Roma and gay people and so many others who also must never be forgotten.  Let us tell our children not only how they died, but also how they lived — as fathers and mothers, and sons and daughters, and brothers and sisters who loved and hoped and dreamed, just like us.

We must tell our children about how this evil was allowed to happen — because so many people succumbed to their darkest instincts, and because so many others stood silent.

I've cut to the section of his remarks in the following video – follow the link to YouTube to watch the entire speech.