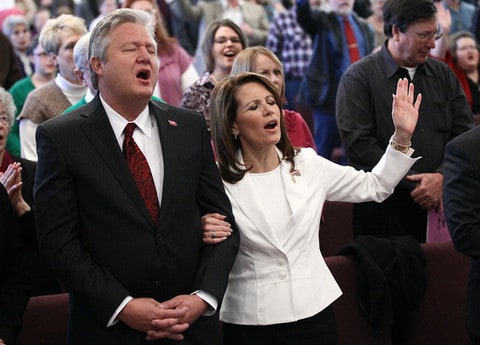 The clinics came under intense scrutiny last year when Truth Wins Out journalist John M. Becker went undercover and later wrote about how counselors tried to steer him toward Christianity and shame him for same-sex desire. Well now there's another undercover report hitting the figurative streets.

Kristina Lapinski, a colleague of lesbian filmmaker Melanie Nathan, recently paid the clinic a visit and pretended to be struggling with her innate desires and a fabricated engagement. The duo posted their results on Nathan's website, Gay U.S.A.

I told [counselor Sheila J. Marker] I had been with a woman, and found that to be true love.  I made my uncertainty clear, that I had two options either to go through with the marriage or to refrain because I thought I was a lesbian.

She asked me if I had slept with my fiancé and I told her that I had not yet and that I was not attracted him. She said “how can you know how it will be until you try?”

She asked if I believed in God, and I answered, “yes.”  She pulled out a bible, handed it to me and asked me to read a passage out loud. It was about love, and then she asked me to analyze it with her. We talked about love and commitment, and even though I have never been attracted to my fiancé, the commitment, she noted, was a form of love.
…
She told me to follow God’s road. “The bible says one man one woman… two great halves come together….” and then spoke to some extent about a woman’s duty to keep the man company… I found that oddly sexist.

She then went on to convince me about what was right and never ever explored the option that I could possibly in fact be a lesbian. She told me the commitment part was important and the love part would grow over time.

That's the same kind of mentality behind arranged marriages: enough time with one person will breed romance, love and respect. Anyone who has ever been in an unhappy relationship can tell you that's not the case.

Lapinski's misadventure will soon chronicled in Nathan's forthcoming documentary, Gay U.S.A: The Movie. Hopefully someone will send the Bachmanns an advanced copy.

Previous Post: « Will Continues Edging Out Of The Closet On ‘Days Of Our Lives:’ VIDEO
Next Post: Video Proves The Power Of Music: Dementia Patient Loves His Cab Calloway »