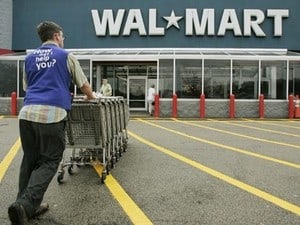 Though they promise they're not trying to pick on Wal-Mart, economists at Penn State have found a positive correlation between the super store's presence in an area and the prevalence of hate groups in that same area.

The study, published in Social Science Quarterly, found that the number of Wal-Mart stores was a better predictor of hate group participation than the unemployment rate, high crime rates and low education.
…
The researchers believe that the correlation between Wal-Mart and hate groups exists because of breakdown of the community. Small local businesses are more likely to be members of civic groups and involved in the community. They are also more likely to have closer relationships among their employees.

“While we like to think of American society as being largely classless, merchants and bankers are part of what we could call a leadership class in a community,” Goetz said.

“We’re not trying to pick on Wal-Mart,” said Goetz. “In this study, Wal-Mart is really serving as a proxy for any type of large retailer.”

Bigger, it seems, is not always better.