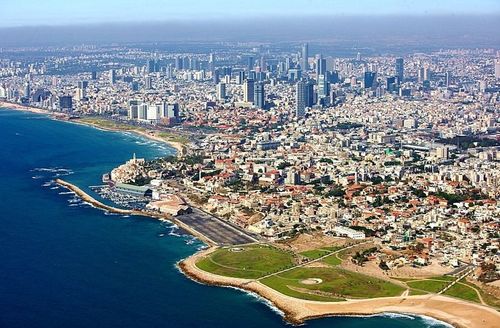 When Palestinian gays want to party, they go to Tel Aviv. Today the Times of Israel published a story by Michal Shmulovich about the Palestinian Queer Party, held in an "underground Israeli nightclub":

People greeted each other in Arabic: Kif inta? Shu ’jdid? The stereo wailed, inti ‘omri! — you are my life! — as the DJ played hit after hit by Egyptian and Lebanese pop stars Amr Diab, Nancy Ajram and Sherine. No Eyal Golan or Justin Timberlake here.

And there were drag queens, dressed to the nines in high heels and short skirts, with bows in their very long, very straightened hair.

… The party is an anonymous safe haven. And that’s why it’s such a hit.

The group alQaws organizes the Palestinian Queer Party — its name for these monthly events. According to its website, alQaws works to “promote sexual and gender diversity in Palestinian society” throughout Israel and the Palestinian territories.

… Call it activism or pleasure seeking: The party celebrates both being Palestinian and being gay.

The Palestinians come from all over. From elsewhere in Israel, from the West Bank, from the Golan Heights — from everywhere, it seems, except Gaza:

Abbud, a young Palestinian man from outside Ramallah, smiled when I asked him how he got to Tel Aviv. “Oh, we have our ways,” he said, hinting that it was not the first time he’d made the voyage. I asked him how he planned to get home at the end of the night. “Getting out is easier than getting in,” he replied.

When I asked him if he thinks people come from Gaza, he laughed and said it’s too dangerous, but added that they would probably like to. There have been rumors of over a hundred gay Palestinians from Gaza who have crossed into Israel to live, to avoid persecution for their homosexuality. However, the move remains dangerous.

The Palestinian Queer Party began a decade ago in Jerusalem, and moved to Tel Aviv "about five years ago." Most of the men who attend are closeted, including the organizer, "Tamer," who lives in Tel Aviv with his boyfriend and two gay roommates. Of the four cohabitants, only one is out to his family. Tamer's two sons from a previous marriage believe he's living with rooommates to save money.

To maintain both their personal safety and their social mobility, Tamer's two rooommates intend to marry women — they both believe they can muster enough bisexual lust to be able to fulfill their husbandly duties. Talal, a young man Shmulovich interviewed at the Queer Party, hopes to escape the region with his partner, both to avoid anti-gay persecution and to avoid imperiling the political career of his brother, an official with the Palestinian Authority:

It would be a major blow to his brother’s high-ranking position … if the community found out about Talal’s sexuality. And so, the young couple plan to move abroad for a while, they told me, hopefully to Europe, to try to “live in freedom.”

Lesbians, who by virtue of their sex enjoy few freedoms in Palestinian society, seldom make the journey to Tel Aviv for the Queer Party.

Shmulovich recorded a few moments of the Queer Party on what appears to be a cell phone. The footage betrays none of the cloak-and-daggerishness of the affair; it could have been shot a at any gay club in the world. Watch AFTER THE JUMP …