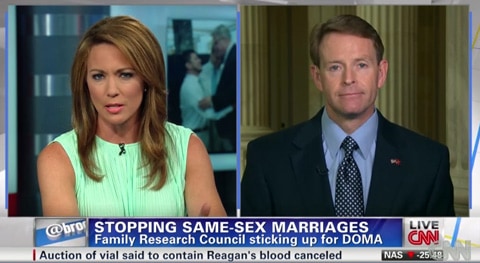 In a discussion about changing poll numbers on same-sex marriage, Baldwin asked Perkins if he's ever been to the home of a married same-sex couple, and then got more pointed.

Check out the must-watch video, AFTER THE JUMP…

A partial transcript from Equality Matters:

BALDWIN: They don’t bother you.

BALDWIN: Not at all?

Said Graddick: “Tony Perkins isn’t merely someone who opposes marriage equality, this is someone who opposes gay people period, and Brooke Baldwin did a good job of making that clear. Tony Perkins cannot be used to represent those who may not yet be there on marriage but support LGBT people in other areas. Baldwin used her questions to put his views into context, and told her audience a complete story.”

Previous Post: « A Bullied 7-Year-Old in Detroit Has Committed Suicide: VIDEO
Next Post: ‘Crack That Wrist’, an Anthem for Gay-Hating Evangelicals: VIDEO »