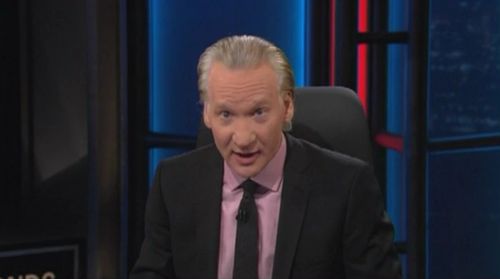 Last night on Real Time, Bill Maher asked the most vexing question of the American political season: Why do so many conservatives think Obama's such a dangerous radical stalimaoinazi?

[Obama] didn't go on a spending spree. He didn't break up the too-big-to-fail banks. They've only gotten bigger. And fail-ier. That's not what liberals wanted. That's what conservatives wanted.

At the 2008 convention, Sarah Palin chanted "drill baby drill!" Under Obama, there's more drilling than ever. That's not what environmentalists wanted. That's what conservatives wanted.

Obama spent most of last year conceding the Republican premise that government needed cutting. That's not what progressives wanted. That's what the Tea Party wanted.

The Dow was at 7949 when he took office. Now it's 12000 and over, and corporate profits are at their highest ever. If he's a socialist, he's a lousy one. He could not be less threatening if he was walking home with ice tea and Skittles.

So the question remains. How could you guys be so unhappy with Obama while I'm so unhappy with Obama? You think you got coal in your stocking? I wanted single payer health care, a carbon emissions bill, gun control and legalized pot. If you get to carry around all this outrage over me getting that sh*t, shouldn't I have gotten it?

So just admit it. This isn't about what Obama is. it's about what you need him to be. Because hating him is what gets you up in the morning.