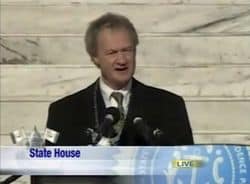 The order signed by Gov. Lincoln Chafee in a Statehouse ceremony directs state agencies to recognize marriages performed out of state as legal and treat same-sex married couples the same as heterosexual ones.

Some gay couples married outside Rhode Island — where civil unions are allowed, but gay marriage is illegal — have not been afforded certain rights because state law is not clear on the subject.

In 2007, then-Attorney General Patrick Lynch issued an opinion in favor of recognizing out-of-state same-sex marriages, but it was nonbinding. Chafee said his signing of the executive order is “following through” on that opinion.

Among the order's implications?

Same-sex spouses of state employees and anyone covered by an insurance company regulated in Rhode Island will be entitled to health and life insurance benefits, gay rights advocates say.

Both partners in a same-sex couple will be able to list their names as parents on a child’s birth certificate, and same-sex couples will be entitled to sales tax exemptions on the transfer of property including vehicles.

Chafee has advocated for marriage equality in the state since his inaugural speech.